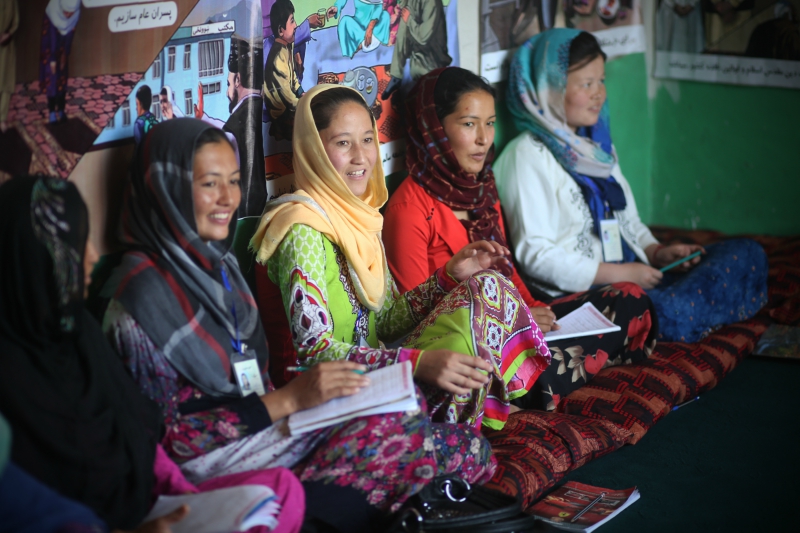 Women for Women International (WfWI) has been working with marginalized women in communities impacted by conflict and war through a holistic program that addresses their multi-faceted lives for nearly 25 years.

Recently, a New York Times op-ed debunked the myth that focusing only on women’s economic empowerment via earning an income is the key to women reaching their full potential and breaking gendered barriers in their communities. The article argues that without political rights for women, ensuring women’s access to tools for income generation doesn’t go far in challenging gender inequality. Women for Women International (WfWI) has been working with marginalized women in communities impacted by conflict and war, guided by this knowledge, that one cannot only focus on economic empowerment or social empowerment, for nearly 25 years.

You’ve been working in the development and women’s rights field for more than twenty years. What does economic empowerment of women mean to you and why does it matter in our world today?

To me, economic empowerment is so much more than earning an income. It is being connected to financial institutions such as banks, having the knowledge and skills required for sustainable saving and access to credit, cash and capital to become entrepreneurs. Women’s economic empowerment is ensuring that women have the opportunity to fully contribute to the economy of their families, communities, and nations and receive fair payment and attribution for doing so. Perhaps most critically, economic empowerment requires decision-making rights that are realized. As we know from evaluations of micro-finance, having earnings, savings and access to credit is not enough – women also have to be able to decide what to do with that money.  And they should have a choice not only in how they spend it – but also how they earn it.

We are at a pivotal moment around the world. As more women have the chance to see education and take part in the formal labor force, we are able to see the incredible impact of women’s economic empowerment. A recent research by McKinsey Global Institute estimates an additional 28 trillion dollars could be added to the global annual GDP if women played an equal role in the economy. That’s an 26% increase. Research today is proving what WfWI has known since its inception in 1993, that stronger women build stronger economies and stronger nations. However, women’s economic empowerment is important simply for its own sake too. Women have the right to earn an income with dignity and lift themselves out of poverty. This is especially important because still, around the world, women are the face of poverty. Another recent report showed that women make up 71% of modern-day slaves. To end that, we have to invest in women’s economic empowerment.

Why and how is WfWI’s work approach to women’s economic empowerment different from the norm in development and women’s rights field?

What sets Women for Women International apart is that our approach is holistic. While we work on economic empowerment, give cash to women, create associations and savings groups, and teach women business and vocational skills, we also work towards women’s social empowerment. Because we work with the absolutely most marginalized women – women who experience extreme gender discrimination, poverty and have suffered from conflict and violence – an important part of the program is overcoming stigma and discrimination, as well as work on health and well-being. In the communities we work, we teach women about their human rights and our program is guided by the context of the lives of women themselves. For example, in Nigeria, we teach women about their land rights because so many women are still deprived of inheritance that is rightfully theirs. In the Democratic Republic of Congo, we teach women about protections against gender-based violence. In Bosnia, we train young women to be advocates for change and equality in their communities. We also raise awareness about women’s health needs, including family planning.

In addition, we work with men. In 2002, many of the women we worked with in Nigeria told us that their male family members were preventing them from joining our program, learning, and earning an income and we should work with them so they become supporters of women’s empowerment. This is why we’ve reached more than 20,000 men in six countries to give them the opportunity to become advocates and allies for gender equality.

Our integrated method is one of a kind and impactful. Through the program, women not only raise their income but also find social empowerment.

One of the critiques of focusing on economic empowerment is that it doesn’t necessarily contribute to women’s political mobilization. What do you think about that critique?

We cannot work on political mobilization and not social and economic empowerment or vice-versa. A woman who knows about her rights and has a network of support might feel braver to seek economic opportunities or speak up in local councils. On the other hand, if a woman is struggling to pay for her needs and worries about providing food for her family, she is not very likely to have the time to partake in political action.

The outcomes we seek in our program are earnings and savings, health and well-being, connections to support, and decision making. We don’t explicitly seek political mobilization, yet we see, time and time again, that when their basic needs are met and they have the tools and knowledge to become advocates, women partake in political action. For example, our program participants in Rwanda are equipped with more leadership skills and take political action. In particular, we are proud to report that 210 women graduates won seats in Rwanda‘s local elections that took place in February and March 2016. In Afghanistan, a woman we served ended up running for local council and with the votes and support of other program participants, win. She now advocates for other women using her political power. Women’s political mobilization is linked to women’s overall empowerment. One cannot happen without the other.

Support the work of SageView Foundation